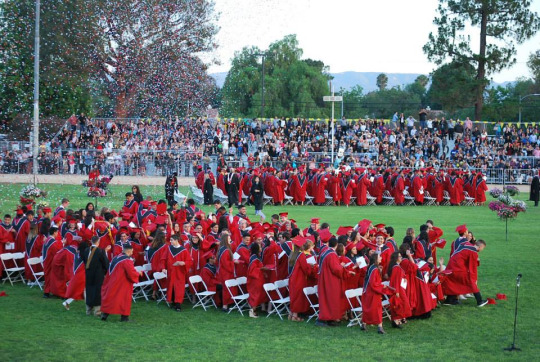 It felt like a typical high school film. When our senior class president said to turn our tassels to the left there was a sea of red gowns jumping out of their seats. The confetti bombs blasted from all sides of the field, showering us with red and white. I was still sitting down.

I finally get out of my seat to hug Gina, the girl next to me, and some of my other peers around me. While the paper rain was still falling I run to the other side of the field, where my close friends were. We hugged each other like there was no tomorrow and some cried like babies. We shouted “We made it, We made it!” and rejoiced in such a magical moment.

Is that not cliché or what?

That’s the moment that pops into my mind every time I think of my high school graduation. Yes there was plenty of departing messages, congrats and too many pictures but for some reason that moment always sticks in my mind.

In those short moments I was thinking about the entirety of my high school experience. Over the past four years my classes became strenuous and tiring. My self-esteem came in waves, my grades turned into an uphill battle and the drama in my life was a civil war. I cried and fought. I loved and I lost. High School was truly a great and terrible treasure. By senior year I grew into a better person: figuring out what I’m capable of and who I need to be. I accomplished so much. So why was it that it took me so long to get out of that chair? Why did me running to join my friends seem like a cliché?

I realized that I wasn’t done. I worked so hard on studying for tests and exams, constantly drilling myself to get a letter or number on a paper. But I’ve only come to accomplish just the simple things. I didn’t raise myself from that seat for such a long time because I knew I could have done more. I could have been better. I felt like there was something missing that made me feel as though I couldn’t relish in the moment. As I ran to my friends I felt as though it wasn’t over. This moment in time with my friends, with that school is over. However there’s bigger things to come and harder challenges to fact. That will not be simple.

My biggest regret in those moments was that I wish I did sigh in relief. I wish I was proud of what I have done, even if there was more I could have done. I wish I had praised myself for graduating from such an intensive program. Just for a small moment I should feel good about my accomplishments. That’s what I learned from graduation. Take that cliché moment if you have it. It might seem fake but the moment is very very real. Have joy in the victory. Feel good about the goal. There will always be more to do, but think about what’s happening now. And just for a second, take it in.

Maybe clichés aren’t too bad after all.

Asia Monét Cooley is from Los Angeles, California and attending SBCC as a freshman. Some of her hobbies include photography, reading, traveling, and filmmaking. A random fact about Asia is that she has gone skydiving.